During the summer of 1835, Georgians were learning in the press about a possible revolt in Texas against the Mexican dictator Gen. Antonio Lopez de Santa Anna.

On August 22, 1835, James Walker Fannin, Jr., a native of Columbus, Ga., who had immigrated to Texas, wrote a letter to a United States Army officer in Millidgeville, the capital of Georgia, requesting financial aide and volunteers.

On Nov. 9, 1835, prominent citizens of the nearby town of Macon called for a “Texas” meeting to recruit volunteers. At age fifteen, Hardaway was among the first 25-35 volunteers who signed up to go to Texas under William A. Ward. Ward signed first and became the group’s leader. The group set out for Texas on Nov. 17 and was joined by others along its route. They became the Georgia Battalion.

For a summary of the experiences of the Georgia Battalion from Nov. 17, 1835, to its demise at the Goliad Massacre on March 27, 1836, the reader can use the Timeline provided on this site.

For Samuel Hardaway’s own narrative of his personal experiences from from Nov. 17, 1835, to his return to Macon, Ga., in May of 1836, the reader can find the report in the article Massacre at Goliad–Samuel G. Hardaway’s Account in the History of the GB on this site.

Hardaway turned sixteen in Feb. of 1836. At that age he fought in the Battle of Refugio on March 14 and retreated with Ward toward Victoria. The men heard the Battle of Coleto, at which Fannin surrendered on March 20. He and a few others evaded capture at the surrender of Ward and his men at Dimmitt’s Landing on March 21. All captured members of Fannin’s men and the Georgia Battalion were massacred at Goliad on March 27. Hardaway, along with

Joseph Andrews, M.K. Moses, and James Peter Trezevant, made it to Gen. Houston’s camp on April 2, and they fought at San Jacinto on April 21.

At the end of April, Hardaway took a leave of absence from the army to return to Georgia. He arrived in Macon in late May, having skirmished with Indians in the Creek War in Alabama. His personal narrative was published in Macon on June 6, 1836. Because of his service in Texas, Hardaway would receive grants of land in Texas for his service there. On July 16, 1836, he was issued Bounty Certificate No. 4002 for 320 acres of land for having served in the army of Texas from Dec. 21, 1835 to Apr. 30, 1836. On Jan. 16, 1838, he was issued Headright Certificate No. 17 for one-third of a league of land by the Board of Land Commissioners for Fort Bend County. Neither of these required credit for fighting in a particular battle.

The year 1855 was an important one for Hardaway. He became involved in the claim by the state of Georgia against the state of Texas for reimbursement of the arms supplied by Georgia to the Georgia Battalion and lost at the Goliad Massacre. A clear summary of the dealings between Georgia and Texas from 1855 to 1858 can be found on pp. 515-519 in the article The Georgia Battalion in the Texas Revolution: A Critical Study in the History of the GB on this site. For documents related to the governmental interchange between Georgia and Texas, see the Addendum below.

During the Civil War, Hardaway enlisted on May 15, 1861, in the army of the Confederate States of America. He became Captain in Company G, the Montgomery Greys, 6th Alabama Regiment. After the War, Hardaway became an adjutant general in the state’s resident militia.

Samuel Hardaway died at age fifty-three in 1878 in Montgomery, Alabama.

While in New Orleans on his way to Texas, Hardaway had met a fellow Georgian, Peter James Trezevant (1815-1860), who joined the group there at age twenty. Hardaway and Trezevant would remain in contact for more than twenty years after 1836. Subsequent to the Battle of San Jacinto, Trezevant remained in Texas until his resignation in November of 1836, serving as commissary and quartermaster for the Republic of Texas and becoming a brevet major at age twenty-one. He returned to Georgia and eventually settled with his family in Franklin Parish, Louisiana.

In 1858, twenty-two years after the end of James Trezevant’s service in the Texas army, he applied for two land grants offered to veterans by the state of Texas. One was a bounty grant of 320 acres for his service from December 23, 1835, to November 23, 1836. The other was a donation grant of 640 acres. A donation grant recognized participation in a specific battle. For whatever reasons, James chose the Battle of Refugio instead of the Battle of San Jacinto for his application. His friend Samuel Hardaway, now a prominent citizen of Montgomery, Alabama, wrote a letter in October of 1860 that supported James’s involvement at Refugio. Trezevant died at age forty-four in 1860 in Deerfield, Franklin Parish, Louisiana, before he could personally benefit from the grants of land in Texas. Those passed to his widow. A biographical sketch about James Peter Trezevant may be found in the tab Biographical Sketches on this site.

There is still not an official state memorial to the Georgia Battalion in Texas. However, with the involvement of the citizens of Goliad, a monument to “Fannin and His Men” was erected there in 1883. At the time of the Texas Centennial in 1936, the present monument was erected. The list there would include those Georgia Battalion members who died in the massacre of May 27, 1836. The list does not include a separate recognition of the Georgia Battalion, a list of those who evaded capture at Dimmitt’s Landing, and an acknowledgement of battalion survivors of the Goliad Massacre. Nowhere is there a marker or monument for those who went on to fight at San Jacinto and to serve in the later government of Texas. There is no monument in Texas specifically for the Georgia Battalion and its role and losses at the Battle of Refugio.

Sources for this brief biographic sketch are from entries and documents on this site as noted in the text, materials submitted by Rick Allen from the Alabama Department of Archives and History, and the Hardaway Family Tree on Ancestry.com. 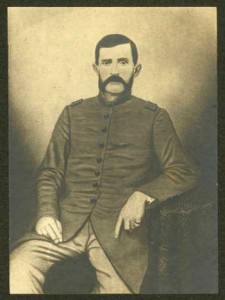 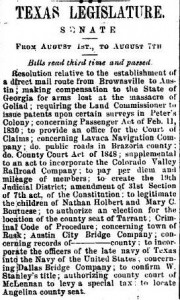 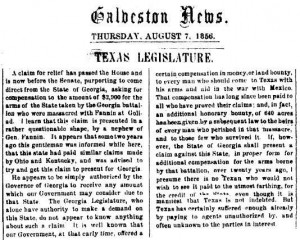